There are a couple of things about the setting I don't think I have adequately conveyed during gaming, so I want to clear this up, for the purposes of Blue Booking, if nothing else.

First, Dun Gwyn is small. It's the end of line line (currently) economically and militarily. The dun itself is a quickly constructed motte-and-bailey. Lord Gwyn1, the first and current lord, has no more than a thirty riders at his disposal, although he commands a larger military garrison too. The small temple of Bel2 is located within the fortified area, and has a handful of temple guards. The detachment of soldiers (about 100, it varies because of their patrols along the coast road, and expeditions to the interior) are garrisoned in tents at the western edge of town. The town is a ramshackle of rapidly constructed buildings, half constructed buildings and tents. One of the few buildings in the town is the poor quality inn, “The Lion's Den” that your party stays at while they are in town. It is lousy with fleas and bed bugs, and doesn't offer a lot of choice in it's sleeping arrangements, either barracks style shared multi-bunk room, the common room (where you just sleep on the floor (or on a table or bench) providing your own bedding, or, lastly, the one private room the inn-keeper lives in, but is willing to rent out to paying customers. The food is mediocre, but filling. Most of the merchants are just visiting, this is the last stop on their trade route, after buying and (mostly) selling here, they turn around and head back to the coast. Most of the stuff they bring is for the soldiers.

Recently an influx of a couple of hundred settlers of various backgrounds arrived, and more are likely on their way. The dun, the soldiers and the settlers are causing tension with the local human (barbarian3) population.

Second, Tirnakaur (the colony that you are in) is hot. Think Georgia through Florida hot. It also rains a lot there, pretty much every day. So it's also muddy and wet. The area is not especially well explored, although that will probably become a campaign goal as you guys level up. Levels 1-3 are traditionally focused on dungeons (and despite being largely outside, the Hill plays like one because of the magic in the forest restricting you to various paths), levels 4+ traditionally focus on wilderness exploration type adventures, or at least overland travels to more advanced level dungeons.

Third, the amazing abundance of animals everywhere. Us modern folk don't think about this much, but there are more animals than humans in any place there are humans. I went down a rabbit hole researching horses this morning and wow, are there a lot of different, specialized horses, not just the differences between riding and draft horses, but various types of riding horses for different purposes, and all of the working horses have specializations to their jobs, with very few horses being multi-purpose. That got me thinking about the other animals, almost every household has at least one dog, for instance, or cats, a necessity for keeping vermin down (although not particularly liked especially well, as a rule), any settlement or homestead is going to have flocks of various fowl, mostly chickens, ducks and geese, and cattle, sheep, goats, and pigs; with pigs being the only ones that are raised solely for their meat (although their hides are useful too).

So I guess Dun Gwyn is mostly a smelly barnyard of an unhygienic tent city. Crossing the Shrill to the Hill might actually be safer than the impending cholera and/or typhus outbreak that is sure to occur in Dun Gwyn. Probably the only clean places there are inside the dun itself, like Lord Gwyn's hall or the temple of Bel.


1Lord Gwyn is clearly an old style lord, he keeps his own band of oath-sworn riders, most lords of Avalon have abandoned this practice.
2Bel is also known as “The Great God”, he is the most widely worshiped deity in the Avalonish pantheon.
3These “barbarians” are mostly of a similar ethnic stock to the people of Avalon, speaking a different dialect of the same root language, kind of like the difference between the English of Shakespeare and the King James Bible vs. the modern American English of today. Isolated groups are of different ethnicities, there are also groups of “wild” elves here, they constitute an entirely different “barbarian” group.

Email ThisBlogThis!Share to TwitterShare to FacebookShare to Pinterest
Labels: WJD

Ramblings of a Great Khan 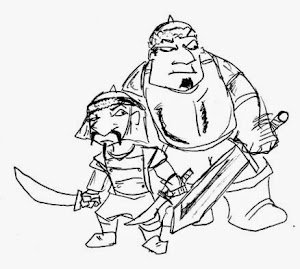 This is my main blog.